How to do Remote Control with Visual Touchpad like this link?

Hi ,
How to do Remote Control with Visual Touchpad like this link " https://www.youtube.com/watch?v=sR3Pkz1B4ks "
I need to use ipad to control 360 tour on PC but i cant send drag event or zoom event to 360 experience on PC machine. Any idea how to made touchpad like in link (my screen is very long 3480*800 it is too small on intuipad)

Thank you very much
Peerapon

Have you tried remote actions/local network triggers? I am assuming the 360 tour is built outside from Intuiface?

Yes., Louie 360 tour built from pano2vr.
I tried remote actions and it work fine but i can’t drag to rotate 360 tour. For local network trigger i ll try tomorrow and will let you know.
Thank you very much
Peerapon

Hi Louie,
I try local network trigger already. But i can’t find any action to send out touchpad to pc machine.
Thank you very much
Peerapon

The video you mention was shot, if I remember correctly what we did 7 years ago

, using a beta version of IntuiPad.

Today, you can either:

Unfortunately, you can’t mix these 2 options.

The only option would be to build a custom Interface Asset that would send some touch from the tablet player to the Windows Player through TUIO, but that’s not an easy job (if doable).

I would have said no until I read Paolo’s post Tosoville: Intuiface meets Unity 3D where he uses https://www.autohotkey.com/

There’s something to investigate here

AutoHotKey seems a nice solution to simulate keystrokes to other apps. Because the syntax can be complex and prone to errors, I found a workaround. I downloaded Pulover’s Macro Creator and recorded some of the sequences that I was interested to capture. Then I exported the macro in AHK format. The macro recorder saved me a lot of time trying to figure out the correct syntax.

@owlstudios081 To control the pano remotely from the iPad, have you considered using AirPlay and mirror an Intuiface + pano2VR XP running on the iPad? Whatever you’ll see on the iPad, it’ll be shown on the PC display. You can accomplish this (without buying any hardware) using a mirroring utility called Reflector.

Hi Tosolini,
Screen mirror is not a good choice for me because my project didn’t use monitor but i use 3 projector project on 3 side of wall (3840*800 px) it hard to use mirror screen. So the best choice for me is Autohotkey to send (left,right,up,down) key to pano2vr but i need you some advice about how to send command from intuiface button?
Kind Regards
Peerapon

Controlling an external app outside from within intuiface becomes problematic, esp if you’re controlling from an ipad.

An easy workable solution would be to include the 360 tour within the intuiface XP, then you can control it from the ipad easily.

Sometime, back I tried including a 360 made in KRPano using different methods, till i could find the right one. Dont export the 360 into flash, as even though it may seem the best solution, it does not go completely into intuiface and I was stuck at the loading screen only. Try different exports to see which one works.

Hi Melvyn,
Could you please explain how to include 360 tour within Intuiface XP?
Kind Regards
Peerapon

you could try exporting it to html

Here is a start for your project @owlstudios081:

I’ve one more question. To use button run the script i ve to use “Launch application” trigger? 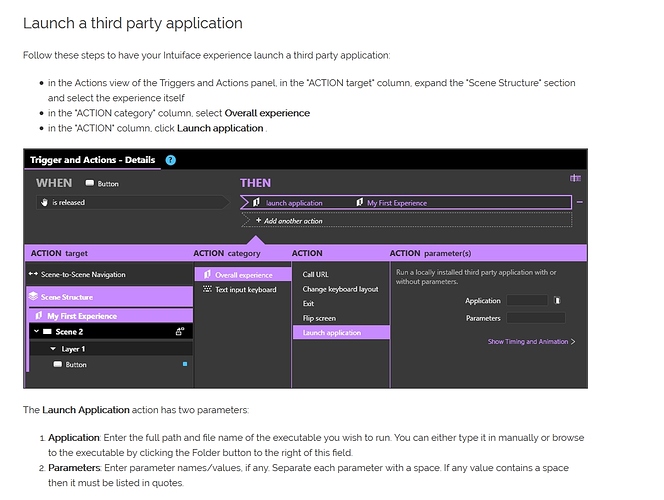 Correct. You execute the AHK file by hardcoding its name and path. No parameters are necessary