How to connect mobile virtual tours to Intuiface with NFC This video illustrates how to connect a mobile virtual tour to an Intuiface installation. Users tap an NFC (Near Field Communication) tag to load a virtual tour on their phones. Hotspots in the tour are programmed to send specific web triggers to an Intuiface XP that translates those messages into actions, such as controlling a video wall, IoT lights or else.

This kind of integration may be appealing for experiential marketing in real estate showrooms, tradeshows and lobbies.

First I registered a new Web Trigger credential key so I could use a Web Triggers API to send messages from the virtual tour to Intuiface via a simple URL post.

Then I created a basic XP with a couple of Web Trigger IA able to receive those messages and perform some actions, such as play a video.

I used the SeekBeak platform to load a few 360 images and add a couple of hotspots to send custom Web Trigger messages to Intuiface. They would look like this:

In SeekBeak I used the Signal URL hotspot type to send the message, since the traditional Open URL hotspot would open a new browser tab, which we don’t want. 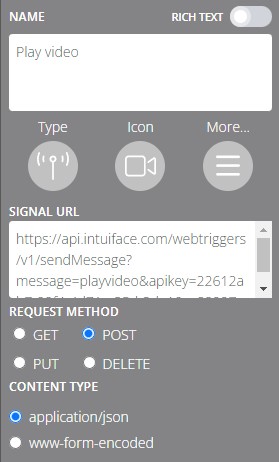 I took a blank NFC tag that I previously ordered from GoToTags. I downloaded the iOS app called NFC Tools and programmed the blank tag to launch the virtual tour when a phone would tap it. In the app, choose Write > Add a record > URL > Paste the public tour URL from SeekBeak

If you use 3DVista for your virtual tours, you need to use a Javascript hotspot and paste this code:

Given their platform limitations, I couldn’t make it work with Matterport.

Again, Paolo, that’s impressive and I love that use case!
Could definitely be applied in museums also.

Thanks @Seb! You did a great webinar about Web Triggers APIs, maybe it’s worth to add a link to this thread.

Sorry for the ignorance: I thought of Matterport as a way to create interactive 3d tours. Is SeakBeak a way to post them online and add hotspots?

Thanks @geoff! There are several platforms that allow you to create virtual tours. SeekBeak and 3DVista are two popular tools that let you import 360 images and add hotspots on them. Matterport does the same, and it automatically creates 3D walkthroughs thanks to a special camera that captures both depth information and images. Ultimately, you choose one or the other based on price, online vs offline, smooth UX, easy of use, features.

Sure Paolo, the latest webinar was actually our live Q&A session, where I talked about web triggers at this timestamp: